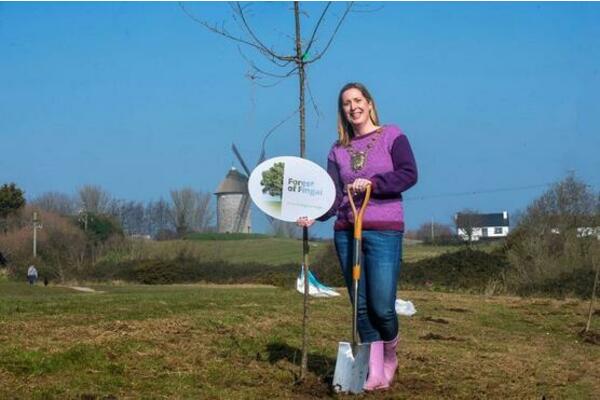 Fingal sets out ambitions to increase tree cover across county

Fingal County Council has unveiled a new 10-year strategy it hopes will help boost the number of trees across north Dublin and ensure that Ireland’s youngest county is left in a better state when it is handed over to future generations.

The Mayor of Fingal Cllr Seána Ó Rodaigh launched the ‘Forest of Fingal’ tree strategy at a special community tree planting event in Skerries to mark the culmination of National Tree Week. Across the week, the council distributed some 16,000 free trees to residents of Fingal to plant at home, with native species including Alder, Hawthorn and Birch given away.

With the overall cover of tree canopy in Fingal currently sitting at only 6.5%, the council wants to significantly increase the number of trees in the county and ensure it delivers a tree population that not merely survives but thrives. The council said it hopes the new undertaking will protect and enhance the county’s trees and woodlands in order to maximise both the benefits trees offer and the character they bring to the county.

Launching the ambitious strategy, Mayor of Fingal Cllr Ó Rodaigh said: “We are aware of just how valuable trees are to helping combat climate change, which is why we want to ensure we are doing as much as possible to increase one of our most important natural assets.

“It’s never too late to plant a tree. They provide a positive impact, particularly on the environment and in climate change mitigation, so the more trees we can introduce across the county the better we will be able safeguard the economic, social and environmental resilience of Fingal for generations to come.”

Initiatives and education in how trees contribute to climate change mitigation and adaptation are referenced throughout the new strategy, which is designed to complement other policies the council has in place.

Alongside the native tree giveaway, Fingal has been funding tree planting workshops and working with local schools to help raise awareness about the importance of trees and encourage a greater number of community-based projects aimed at protecting and improving the entire tree population under the Council’s care.

Kevin Halpenny, Senior Parks Superintendent at Fingal commented: “The Forest of Fingal strategy sets out our clear ambitions and commits the council to increase the number of trees being planted in as many areas as practically as possible. Achieving these aims will help boost the biodiversity of the county and create a thriving and well managed urban forest resource right on the doorstep of the country’s most populous city.”

Currently, Fingal County Council has around 2,000 hectares of public open space, of which a large proportion are heritage landscapes. It also manages approximately 70,000 street trees which help shape the landscape character of towns and villages across the county

'Forrest of Fingal' tree strategy did not go unnoticed during the National Tree Week!

This information was also released to Independent.ie.

You can be read the full article HERE.